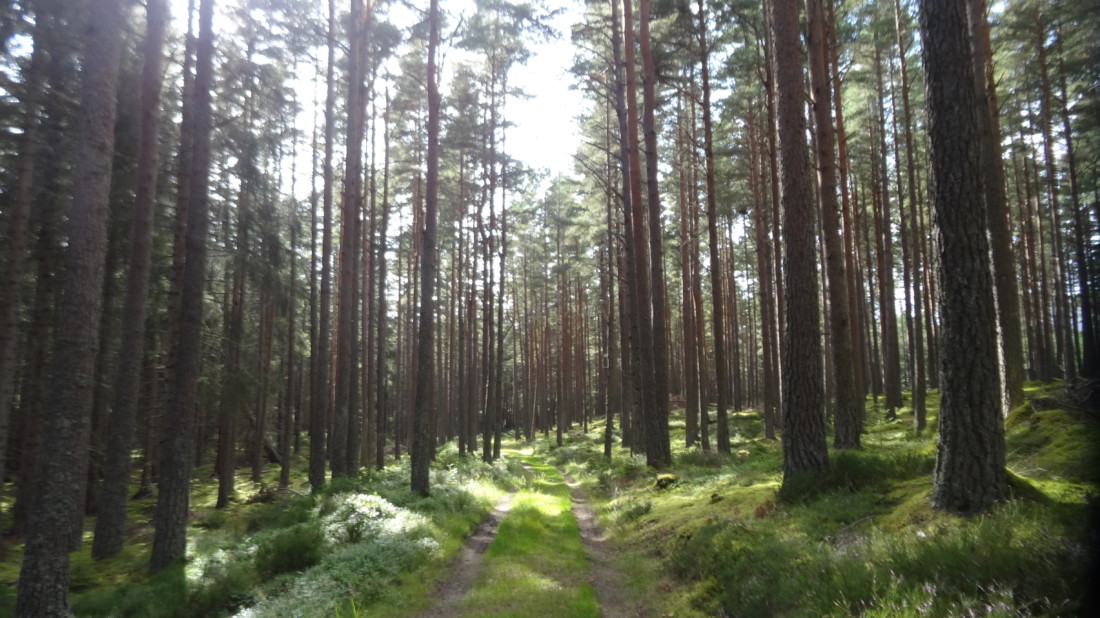 The Blelack Estate can be traced to before 1500 and features a rich, interesting history of important Scottish figures.

Blelack House , once part of the current estate,  belonged to the Gordon Clan in the 1700’s. On the estate there was a hollow known as “the Seely Howe” – the Hollow of the Fairy Court. The fairies lived here and were perfectly contented and friendly. However, just before setting off to fight at Culloden in 1745 one of the Gordon Clan, Charles Gordon decided, for reasons unknown, that he had had enough of his fairy neighbours and demanded that the local wizard or Fairy Doctor, John Farquharson rid them from the Seely Howe. John using his wizardry cast a spell to get the fairies to leave. The fairies were understandably incensed and refused to leave as Farquharson had failed to find them somewhere else to live. Farquharson then commanded the fairies to flit to the Hill o’ Fare, near Torphins, just under 20 miles away. The evicted fairies hated their cold new home and so cast a spell on both Farqharson and Charles Gordon.

The spell on Farquharson;

Now we maun awa’ to the cauld Hill o’Fare,
Or it will be mornin’ e’er we get there;
But though girse and corn should grow in the air, John Farquharson and his
folk shall thrive nae mair

The spell on Charles Gordon;

John Farquharson allegedly suffered bad luck from the day he evicted the fairies from Logie Coldstone. Blelack fared no better as the estate was ravaged by the Hanoverian troops and the house burnt. Charles Gordon only returned to Blelack for one year, after living in hiding for his part in the Jacobite Rebellion, before he died.

The estate on which the lodges are built can be traced back to fifteen-hundreds with a rich tapestry of historical events.

We know that the Blelack estate belonged to a branch of The Gordon Clan from around 1500. One of the more well known family members was Charles Gordon who was born in 1716. Charles led the men of Coldstone, Migvie and Cromar at the Battle of Culloden in 1746.  They were amongst the first to attack the English and although Charles was wounded, he managed to escape without being apprehended.

He lay low for some time before being taken in and hidden in an unused garret in the nearby Manse of Towie, with the connivance of the Minister of Lumsden, The ministers wife was full of compassion for Charles and did all she could to keep him hidden. He ventured down from the garret at night and servants and locals started to be suspicious about so called ghosts suddenly making regular appearances around the grounds. Charles quickly fled to another local house, The Mill of Gellan at Coull. From there it is believed he fled again, this time seeking refuge with his sister, Helen, at Dunnottar near Stonehaven.

He finally had the forfeited lands of Blelack restored to him in 1784 but only had legal possession for one year before he died in 1785.The original house had been burnt to the ground when it was confiscated but before his death Charles set about rebuilding it.

In 1785 the estate fell to Charles Rose Gordon, the grandson of his sister, Helen. He was known as “The Red Laird” – simply because he had light hair whereas other Gordon family members had dark hair!

“The Red Laird” sold the estate in 1794 to William Gordon of Dundee and Woodhaven Fife, no relative of the original Gordon family.

William Gordon of Dundee owned Blelack and Pronie estates from 1794 until his death 1802. He obtained a considerable fortune by his marriage, but unfortunately he invested badly and so lost a major portion of it.  None of his three children had children and his son eventually sold Pronie to James Clark and Blelack to John Forbes of Newe in 1802.

John Forbes of Newe in turn bequeathed it to his relative the local minister from Strathdon for the advantage of his son, General Sir John Forbes of Invereman, who sold it in 1862 to the Lord Provost of Aberdeen. The house was accidently destroyed by fire in 1868 and The Provost in turn sold it after only a few years of ownership to William Coltman Esq . Coltman rebuilt the house shortly after purchasing the estate. The low wings on either side of the main block are the only links with the Jacobite era.

Coltman’s only daughter married John Clark of Tillypronie in 1851 and his son William B Coltman bought Deskry in 1869 and at about the same time he bought Pitellachie (sometimes called the Barony of Kinaldie).

Sir John and Lady Clark of Tillypronie had only one child, who died in infancy, so Tillypronie became the property of Lady Clark’s young nephew William Hew Coltman, the second son of William B Coltman of Blelack and Deskry, his elder brother having died in 1882, aged 21.

In 1945 Blelack house and estate were divided and sold off separately, with the house being converted into flats. It remains as flats to this day.

The estate was purchased by timber merchants and in 1953 was sold again to Gray’s timber merchants whose family members still own the estate today. Blelack had its own sawmill which closed in the early 1990’s. We use the old sawmill site today to process and store wood to supply to the lodges and you will often see our forester working there or indeed chugging along on our lovely old tractor to replenish your wood stores. Our handyman, Sandy, used to be the site manager at the sawmill and has some incredibly interesting stories about life at the sawmill –  do feel free to stop him and have a chat about the good old days!

There is much for those visiting Royal Deeside to see in the way of archaeology. The lack of industrial activity and the rural landscape have thankfully preserved so much of our past. Below are just a few sites of interest which are extremely close to us at Cairngorm Lodges.

A site of archaeological interest on the estate itself is Poldhu wells; mineral springs located just a short distance from our Red Squirrel Lodge. The wells had become severely overgrown but in 2008, with the help of local volunteers, they were restored to their former glory. Interestingly the wells boast waters of healing properties and debate continues still today about whether the water in the local area does truly have health giving qualities. One thing is for certain, regardless of where you come from you will find the local water fresh tasting. Information leaflets about the wells are in the lodges.

The belief is:
“There is a mineral spring in the Parish, a little to the south of the Church, called Poldow, which in the Gaelic signifies a ‘black pool’; the water of which, some years ago, was much and successfully used for scorbutic and gravelish disorders. Great crowds of the country people still resort to Poldow and drink of waters for all disorders.”

Located just 5 minutes from us on the Tarland to Aboyne Road, The Tomnaverie stone circle was built around 4000 years ago on a small hill. Its characteristic feature is a large stone set on its side (recumbent), flanked by two upright stones. Within the stone circle are the remains of a low cairn which archaeological excavation in 2000 showed pre-dated the stone circle. The views from the stone circle across the Howe of Cromar and over to Lochnagar are just spectacular.

Located just outside Tarland, on the road to Aberdeen. The 2000 year old Earth House is a well-preserved souterrain or underground passage, with roofing slabs intact over the large chamber and entrance. It was most likely used to store food for the local community. It’s a favourite with kids – getting them to come out can be an issue!!

The Kinord Cross can be found on the banks of Loch Kinord, which forms part of the Muir of Dinnet Nature Reserve.  It is a beautifully carved 6ft granite cross most likely dating back from the 9Th Century AD and is the best example of a Celtic symbol stone in Britain. It is suggested that the cross was commissioned by St Fumoc to furnish a chapel at Kinord, although others believe that it dates back to the days of Malcolm Canmore when the chapel was consecrated by his wife, Queen Margaret. The stone was moved from its original  home in 1820 but a hundred years later returned to the shores of Loch Kinord, at least close to the original site.

It’s well worth tying in a trip to Loch Kinord with one to explore the Burn O’ Vat, both are only 10 minutes from Cairngorm Lodges.

The story of John Brown

Its a matter of record that Queen Victoria fell deeply in love with all at would become known as Royal Deeside. “All seemed to breathe freedom and peace…” she wrote. It’s a sentiment that echoes through the years and still rings true today.  Royal Deeside is home to the incredible Balmoral Castle Estate, autumn home to the Royal Family and only 25 minutes drive from Cairngorm Lodges. The Blelack Estate where the lodges are located can be traced back to before the 1500s. An estate occupant in 1820 was Mr Andrew Robertson, the only medical man in the Deeside area at the time. In 1852 he gave medicine up because he was appointed Commissioner of Balmoral, a post he held for 28 years.

Here’s where it gets interesting; in 1865 he moved back to Blelack and built a house there called Hopewell. When he retired in 1875 he hired a servant who went on to become quite famous in royal history, immortalised by Billy Connolly’s portrayal in the film ‘Mrs Brown’.